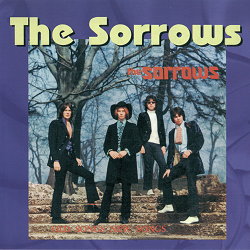 The truely complex story of Coventry s SORROWS has already been painstakingly researched by David Wells in his notes for SANCTUARY s 2000 release “TAKE A HEART” (NEECD480). While that set mainly focuses on the band s awesome PYE/PICCADILLY recordings from 1964-1967, we herewith bring you their complete output which was especially done for the Italian market. It wasn t unusual for British (or American) artists to do foreign language recordings of their hits. This way record companies tried cracking selected European markets like Germany.Italy.France or Spain, where an original English-sung version sold nil. As for the SORROWS the first of such issues was an Italian-sung rendition of their only TOP 30 hit “TAKE A HEART”, which was released sometime in early 1966. For the B-side the band did a remake of their second 45 “BABY”. Renamed “VIVI” it boasted a completely different arrangement.

When bass player PHILIP PACKHAM and singer DON FARDON left shortly after the August 1966 release in the UK of “LET ME IN” b/w “HOW LOVE USED TO BE” (both taken from their by now eight month old debut album), the SORROWS continued as a trio for a while. FARDON started a solo career (with numerous worthwhile releases to his credit), so it was now down to PHILIP WHITCHER (lead),WES PRICE (having changed from rhythm to bass) and BRUCE FINLAY (drums) to keep the band s name alive. WHITCHER (commonly known as “PIP”). took over most of the lead vocals, having shared vocal duties with DON FARDON before anyway.

All of a sudden an Italian tour was on offer so they packed their bags and left for the Sunny South. To strenghten their sound they added a second guitar player, ROGER LOMAS, to the line-up. Over at RCA studios in Rome this fourpiece line-up recorded “VERDE,ROSSO.GIALLO.BLU” and an Italian-sung version of “NO NO NO NO” (another earlier flipside) in late 1966. These two tracks were coupled and released in early 1967 to an indifferent public, at which time ROGER LOMAS and PIP WHITCHER had already returned to Coventry. Both of them were later reunited in the EGGY.
WES PRICE and BRUCE FINLAY stayed in Rome for a while, teaming up with another axeman from the UK, CHUCK FRYERS and a temporary vocalist called SIMON CATLIN, who soon left again. After PRICE.FINLAY and FRYERS also returned to the UK they added CHRIS SMITH on vocals and keyboards to the line-up. As if this isn t confusing enough PIP WHITCHER returned sometime in mid-1967 and then it was time for BRUCE FINLAY to leave the drum stool to one MICK BRADLEY.
Anyway, late 1967 saw their last PYE release in Italy with an incredibly lame take of “ZABADAK” sung by bassist WES PRICE. This boasted “LA LIBERTA COSTA CARA” (a native version of “HOW LOVE USED TO BE”) on the reverse, being arguably stronger than the pointless DAVE DEE & CO. cover.
Milan-based independent label MIURA then took them under their wings for the recordings, which are available on this CD for the very first time since their initial release in 1968 (no mentioning of the shabby EVA reish here!). Credited to CHRIS & THE SORROWS the first release on MIURAwas “PER UNADONNA…NO!” blw “10 AMO TE PER LEI”. While the flip was an older composition by CHUCK FRYERS (co-written with FINLAY) the top side was a nice rendition of the HOLLIES current hit “LISTEN TO ME”. As David Wells pointed out in his liner notes the vocals were actually not by CHRIS SMITH but shared between PIP WHITCHER and WES PRICE!
This was followed by another great 45 called “HEY HEY” (its sleeve showing the band as a five-piece), written by the Italian-sounding team of CABAGIOILIBANO. This was a superior take than the one later released on their next LP (where it was credited as a FRYERS composition!). Said album was recorded under difficult circumstances, with BRUCE FINLAY taking over drums again haltway through the sessions.
WHITCHER also left another time, so the finished album sleeve showed the final four piece line-up only. The record consisted of compositions by FRYERS and a couple of covers, though none of these could better the originals (e.g. the SMALL FACES” “ROLLIN OVER” or the TRAFFIC and FAMILY covers).
Still the “OLD SONGS NEW SONGS”-LP, originally released in 1968 on MIURA, is nowadays one of the most sought-after SORROWS items, and RIB is proud to put the final word on the band s releases.

There are no reviews yet, would you like to submit yours?

We use cookies to ensure that we give you the best experience on our website. If you continue to use this site we will assume that you are happy with it.Ok